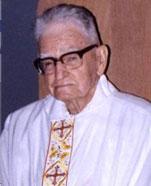 Affectionately known as 'The Mons', was born near Toowoomba in 1904 and when he completed secondary school, became a teacher. After three years he entered seminary training, being ordained as a priest in 1930.

He always encouraged the people of Redcliffe to put their problems before God and an answer would come. He was a great organiser and builder and eventually several schools and a church were in operation. He always reminded those who would praise him that ‘It’s 95% God’s work and 5% your own.’ He was a simple and humble man living in very basic accommodation for many years saying that ‘Money is needed for other things first’. The Mons had only one motivation in life and that was to seek the light of Christ and to serve God in his people. Eventually in 1973, one of the schools, Frawley College, was named after him. At his funeral in 2002, young people wore the uniforms of all his former schools and SCCC students formed a guard of honour for the man who had built their college and given it his spirit of prayer and working to the best of one’s ability.